The La Tagliatella brand is a well-established Italian restaurant concept based in Madrid, Spain, with locations throughout Spain and into France, Germany, India, and China.

With several North American locations scheduled to roll-out in the coming months, ai3 traveled with the project team to Madrid to benchmark several of the existing locations. It was a whirlwind tour of locations. Chris Carfora and I started our Spanish adventure, leaving Atlanta on an overseas flight on Wednesday evening, traveling through the night to make our initial meeting at 9am, Madrid time, at the Tagliatella home office in Pozuelo, Spain. There, we met up with Mike Muldoon, David Smith, and David Henzlik of AmRest, North America, Mary Reynolds and Kelly Norris of The Reynolds Group, along with Maciek, Piotr, David Justo , and Steve Winegar.

After a few team meetings, we all piled into a mini-tour bus with the ambitious agenda of seeing 14 Tagliatella locations, all of which had certain idiosyncrasies and unique elements that would help paint the picture of the desired design aesthetic that needed to be maintained in North America. 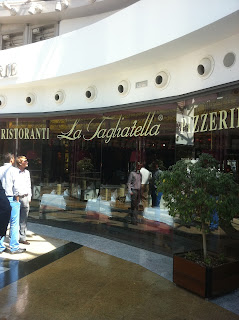 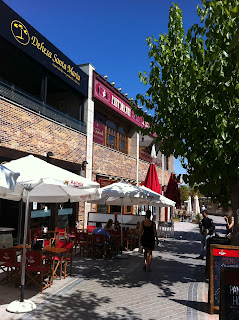 With jetlag weighing heavy on our bodies, we managed to get through all 14 locations, stopping to eat lunch and dinner along the way. Our resounding opinion of the cuisine at La Tagliatella was that of incredible flavors, powerful influences of hand-made, caring pizza combinations, and delicious pastas and sauces. The food was so very amazing and will definitely cause a stir in the US. There was a sense of authenticity to the food - the way only true Italian food can. We can only compare it to what we have come to know as Italian cuisine here in the US, but it was distinctly different - something that can only be fully understood through experiencing it. This difference of offerings will be a game-changer for the Tagliatella brand in the US. 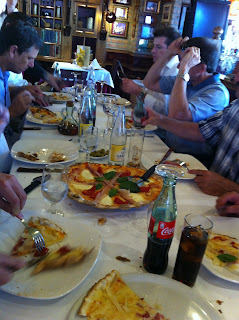 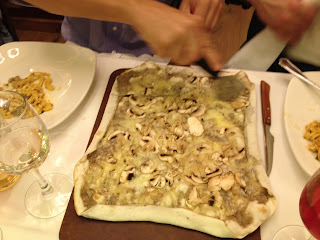 The care and detail of service was equally impressive. It might have been the language barrier that added to the mystic of the service, but there was no mistaking the love and care that every server had for the product, the company, and the reputation. Every single person we encountered that worked for the La Tagliatella brand demonstrated a level of care that no doubtedly added to the experience.

The Spanish culture has a wonderful casualness about it. It slides the work day slightly forward into the day. 9am meetings didn't really start until 10 or 10:30. Lunch begins somewhere in the 2pm hour and dinner before 9pm is unheard of.

After our whirlwind tour of Tag locations, and Day One in the books, ending around midnight, we crashed hard, trying to catch up to the new time zone.

Day Two involved several meetings with our Spanish architectural counterparts, ABC Arquitectos, and the local millwork/artist that designs and supplies much of the interior decor, DecoRetro. The team seemed to nicely complement each other's strong suits and the morning's meetings resulted in well-coordinated efforts for the first three Tag locations in the US - Metropolis and Emory Point in Atlanta, and Clarendon Blvd in Arlington, VA.

Meetings ended around lunchtime and we quickly popped back to our hotel in Pozuelo, for a quick refresh and then headed into downtown Madrid to check out the Spanish culture and nightlife.

Our first destination was the Mercado de San Miguel. The “Mercado de San Miguel” is one of the oldest covered markets in Madrid. It was recently refurbished and now offers and whole new concept of market. You can actually go and buy good fruits, cheese (more than 100 different varieties) and fish among others things… you can also have oysters with a glass of wine while reading a book bought in the library recently opened inside the place. 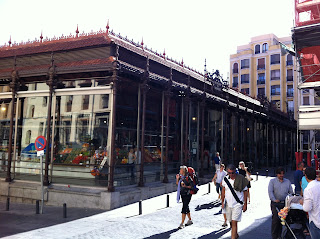 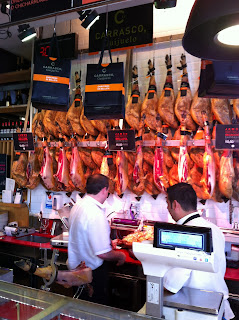 Its 33 shops offer a great variety of the best delicatessen products in a magnificent setting. It can be called the market of this century even though the Market is almost one hundred years old (it was constructed in 1916).

The Mercado was the ideal portrait of what I think many warehouse redevelopment projects in Atlanta are trying to emulate. Rows of fruit stands, ham or jamon legs hanging all about, and Sangria stands littered throughout the market. Market San Miguel seemed so alive with locals and tourists alike that it created an energy of metropolis that most everywhere else would love to have.

After sipping a few Sangrias with the team, we headed over to Plaza de Mayor. The Plaza Mayor has been the scene of multitudinous events: markets, bullfights, soccer games, public executions, and, during the Spanish Inquisition, "autos de fe" against supposed heretics and the executions of those condemned to death. The Plaza Mayor also has a ring of old and traditional shops and cafes under its porticoes. Celebrations for San Isidro, patron saint of Madrid, are also held here. The Plaza Mayor is now a major tourist attraction, visited by thousands of tourists a year. We posed for a few photos, drank a few beers, and generally took in the scene. David Henzlik even danced and/or taunted a creature in the square, ultimately making friends as he went.

Dinner wound up in another public plaza where we dined on ox tail, jamon belotta, olives, beer and wine.

After Friday, Chris and I were on our own until Monday's flight back to Atlanta. The team said their farewells until next time and we headed to the train station on Saturday morning to figure out how to book a “bullet train” ride to Barcelona, our departure city. The bullet train, called AVE, Alta Velocidad Española  is a service of high-speed rail in Spain that reach speeds of up to 310 km/h. The name is literally translated from Spanish as "Spanish High Speed", but its initials are also a play on the word ave, meaning "bird". 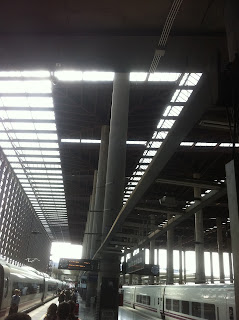 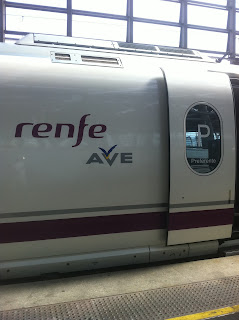 We had only a few things on our itinerary in Barcelona, the penultimate event being the Barca-Valencia football match on Sunday evening. Upon our arrival in Barcelona, we quickly realized that the few words of Spanish that we picked up on in Madrid would do us no good in Barcelona as Catalan was the local language. While it was somewhat similar, negotiating taxi rides and ordering food was difficult. We made our way to Hotel Cram, a really cool and hyper-modern hotel in NW Barcelona, midway between Camp Nou and the La Rambla, the main tourist drag in Barcelona that led down to the waterfront. The juxtaposition of the old building’s exterior and the breath-taking avant-garde interiors was a beautiful combination. 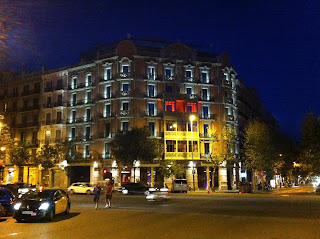 Our first matter of business, though, after checking in was to figure out how to claim our football tickets for the game. Tourism is, no doubt, the main industry in Barcelona and they made is very easy to claim our tickets from ATM-like machines littered throughout the city. 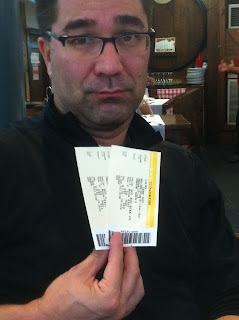 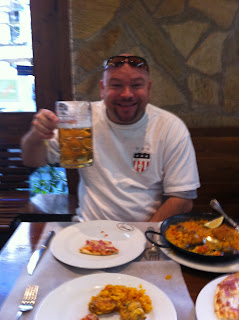 With tickets in hand, we were feeling great about seeing the city. We rambled down La Rambla, stopping in a few stores and wandering through a few artist markets in small outlying plaza off the main strip. Our day ended down at the waterfront for dinner on the docks, overlooking the marina.

Sunday began with an amazing tour of the "Third Cathedral" of Barcelona, Sagrada Familia - the unfinished masterpiece by legendary artist/architect/builder Antoni Gaudi, distinct with his architectural and engineering style—combining Gothic and curvilinear Art Nouveau forms. His elegant use of stone and concrete to form the most organic structure literally brought tears to my eyes upon entering. This is a journey that EVERY architect needs to do to understand the possibilities of design and the impacts and responsibilities that we all have to the world around us to create lasting works of art and architecture that embody our cultures and our generations. 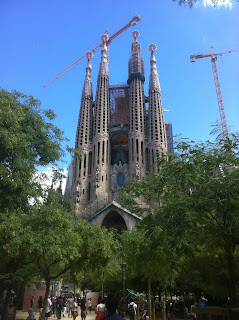 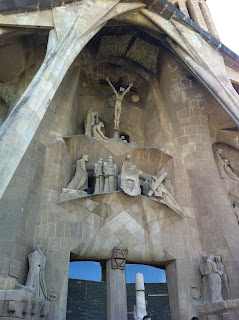 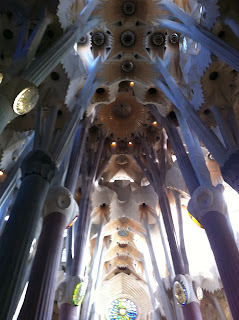 Our minds quickly shifted to football as we made our way to Camp Nou. The football museum at Camp Nou is one of the most visited museums in all of Spain and it did not disappoint. To see the Champions League trophies on display was incredible.

The game, later that evening, was all it was touted to be, with the blaugrana victorious by a score of 1-0 on a brilliant goal from Andriano, a young and spritely defender that curled a shot from outside the penalty box into the upper right corner. Messi, Iniesta, and Xavi were amazing and so very much a step above everyone else on the pitch. It was an experience I'll treasure forever. 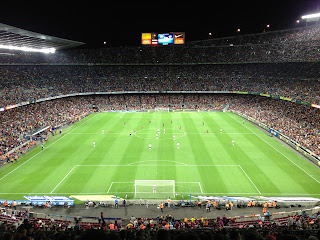 Our flight back stateside on Monday morning was long, but nicely uneventful. The trip left a lasting impression on both Chris and me. The Spanish culture is amazing and their way and pace of life is admirable. They work hard, play hard, have distinct points of view and opinions, and generally love and live life to the fullest.

We left with the unequivocal opinion that the La Tagliatella concept will do extremely well in the United States. The team that has been put together for this effort believes so fully in the possibly and their enthusiasm was so very contagious. The ai3 team is excited to be a part of such an endeavor.