My trip to New Orleans: Working with Camp Restore

Post by Mark Peterson:
I love a crawfish boil, especially when the party is in New Orleans. If you have ever been treated to a boil then you know that there are no plates or silverware.  The crawfish, potatoes, artichokes, asparagus and corn on the cob are poured steaming hot onto a long communal table covered in newspapers. It's messy, a bit unorganized, and an absolute blast. You roll up your sleeves, get your hands dirty, and dive into a serious bit of work with friends and neighbors.  It's a lot like volunteering, and it speaks volumes about my recent trip to New Orleans. 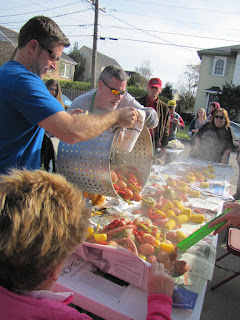 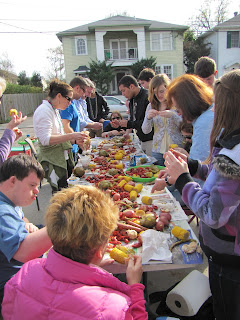 I have been to New Orleans three times since Katrina.  The first trip, I slept in an old school, traveled by bicycle, and worked in a Tyvex suit with a respirator gutting homes and performing structural inspections. Things are a lot better in New Orleans today, and I believe it's due in large part to the resilient spirit of its people and those who come year after year to do their small part.

This year I met my good friend Peter Clements and the folks from Project Relief out of Briarcliff, New York, to put a capstone on six years of service in New Orleans.  This year's group was made of twenty-six youth and sixteen adults. Many of the team has been down several times before and everyone was really motivated to make this their best trip yet.

We were hosted by the local non-profit, Camp Restore. The camp served as our base during the week-long trip and provided all the necessary accommodations and all the tools needed for our work. It's important to note that many larger organizations like the Red Cross have turned their efforts to local non-profits like Camp Restore in years past.

Our typical day would have the group up around 6 AM where smaller teams would then help prepare meals or do cleanup. After breakfast, the adults would organize the youth to go out to several sites across the city.  The great thing about this year's trip was the variety of opportunities to perform service work. The volunteers worked at a food pantry, a community garden, a local church, and even at a large animal rescue shelter. Adding variety to the work was great because it helped to keep everyone interested and allowed the team to see different parts of the city. As a bonus, it also meant that everyone had a bit more energy to go out for dinner or to see a parade. On the evenings where we did not go out into the city, we would always meet after dinner to reflect upon the work we had done and to share stories from the day. Allowing for reflection was a key goal for the group and it ensured that everyone had an opportunity to share their experiences from the day. 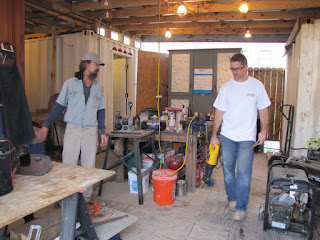 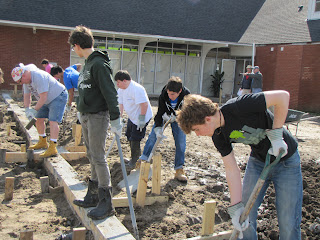 (Building an irrigation system at Trinity Church)
For many of the youth, this will be their last trip as they move onto college or other adventures, but I know that their experiences in New Orleans have shaped them in positive ways and broadened their understanding of the world. 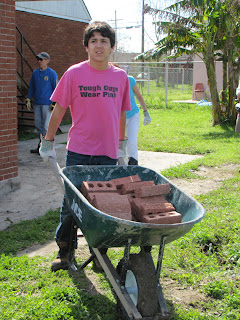 (Sean hauling bricks for the courtyard at Trinity Church) 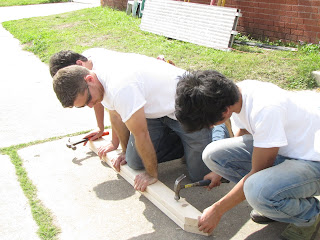 (Building new supports for the roof at Trinity) 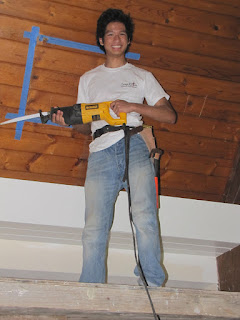 (Henry preparing to cut a hole for ductwork at Trinity Church) 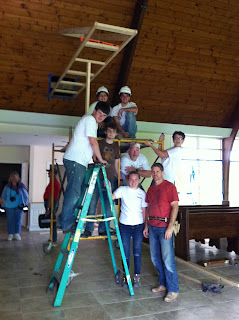 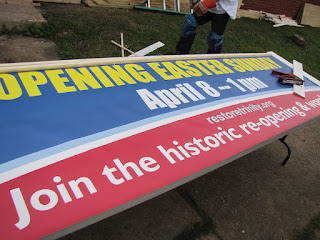 (Grand Re-Opening sign from Trinity Church)
Please stay tuned for the next post about our visit to the Ninth Ward and our tour of one of Brad Pitt's "Make It Right" homes.